ROUTE OF THE KASBAHS

That’s the name by which is known, in the South of the High Atlas, a tour containing a series of fortresses. Built in mudbrick with crenellated towers and raw brick ornaments, they are sometimes authentic fortified villages.

They are located in a spectacular landscape in which the desert and the mountain meet, combining all shades of ocher to red, the rivers create gorges that become fertile valleys or oases with palm groves.

If the old Kasbahs seduce with their evocative power, the landscape impresses by the strength of their contrasts, their luminosity and the silence that floods the soul with peace and tranquility, so this route is one of the most attractive and sought after in Morocco.

WHAT IS A KASBAH?

In southern Morocco, the word kasbah (tighremt, in the Berber language) is usually applied to a square-plan building with four towers at the angles, constructed with adobe (mudbricks) and normally destined be inhabited by powerful family.

The oldest kasbahs can date from the 17th century.

Touring the Route of the Thousand Kasbahs is an excellent opportunity to discover an unknown Morocco and deepen the influences that sub-Saharan Africa has played in Moroccan history and culture, especially thanks to the commercial routes established with legendary cities like Timbuktu, in Mali and Sudan.

The best known and best-preserved Kasbah in all of Morocco is the Kasbah of Ait Ben Haddou, but we cannot ignore the Kasbah Glaoui or Telouet, the Kasbah of Taourirt in Ouarzazate, the Kasbah Amridil, located in the Palm Grove of Skoura, and many others preserved half-ruined and dotted along the Draa Valley, Valley of the Roses, Dades Valley and Todra, Agdz and Nkob. 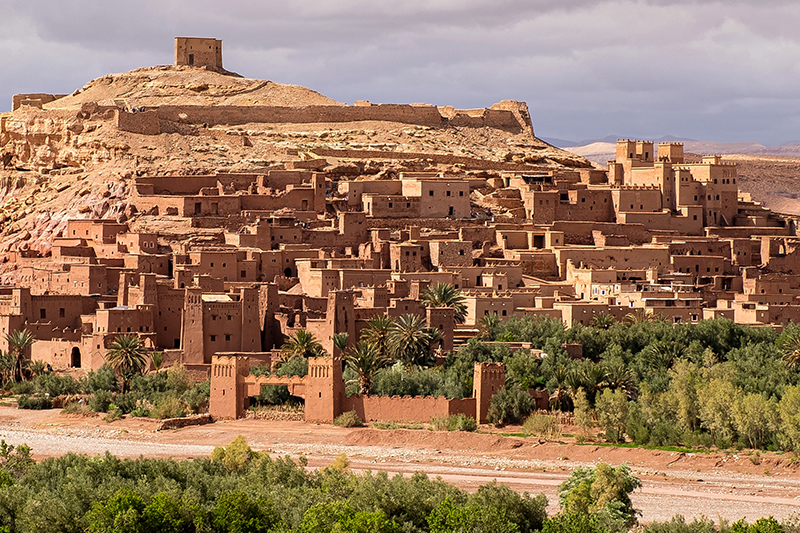 Located on top of a hill, it has an incredible fortified village (ksur) built in adobe that occupies a whole hillside at the bottom of the river and offers excellent landscapes and one of the best views of Morocco.

Infinite are the sensations that this place transmits during sunset and at sunrise due to the contrast of colors, lights and shadows that are created.

Ait Ben Haddou is one of the best-preserved Kasbahs in all of Morocco, and is an outstanding example of the construction of the Kasbahs that can be found in the Valle del Draa, Todra, Dades and Sous.

In Ait Ben Haddou it can be seen how the constructions are made in a strategic position facing a mountain, surrounded by angular towers and a defensive wall. The date of which Ait Ben Haddou dates is not exactly known.

This impressive adobe construction is still inhabited by a few families.

It is crowned by a cliff about one hundred meters high, in which there are remains of an old building and from where you can see a magnificent landscape, an ideal place to take some photographs of the surroundings. Some of the most typical photos of Ait Ben Haddou have been taken from this cliff.

Its crenellated towers are decorated with blind arches and geometric designs that create an effect of light and shadow. The profile of the constructions, the impressive surroundings and the kindness of their people have attracted several film crews for many decades.

Although the landscape is arid and rocky, water is not scarce. The land is of little vegetation, although the date palm, the fig tree, the orange tree and lemon tree, among other fruit trees such as the almond tree or the apple tree. In a wide view of the landscape we can see different shades of red, according to the time of day, with its many fortified towers that seem attached to the mountain. 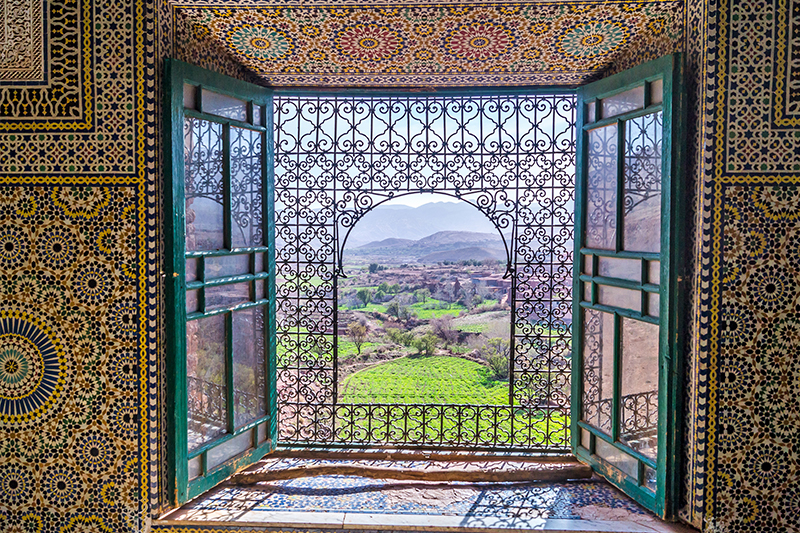 Although the Kasbahs of Taourirt and Ait Ben Haddou almost monopolize the attention of tourism, one of which certainly deserves a visit is that of Telouet, former Kasbah Glaoui located at 1650 meters of altitude

This Kasbah has a special interest, not only for the sober and massive splendor of its architecture, different from others on the route, but also for the fame of who was its main occupant, Thami el Glaoui. Born in 1879, the son of artist Hassan El Glaoui and grandfather of filmmaker Mehdi El Glaoui, his name derives from what was one of the most important tribes of the High Atlas due to his ancestral control of the nearby salt mines and the rights of passage of the caravans that linked the Mediterranean with the Sahel.

Immersed in helplessness and decline since his abandonment in 1956, El Galoui Palace still allows us to admire the lust and sumptuousness in which “the last lord of the Atlas” lived. Built on the foundations of an old complex that included a kasbah and a fonduk, it is said that more than 300 people worked on its construction for 5 years, of which 3 were for wood carvings, stucco, stained glass and tiled.

Walking through it, there are cedar doors, calligraphic relief, ataurifes, lacerias, arabesques, arches, columns, carved capitals, sahns, sebka cloths, nesjis, tiling and, in general, a good part of the elements that make up the Islamic architectural decoration. And is impossible not to be impressed by the beautifully lattice window from which splendid views of the landscape are obtained, making a contrast between the exterior light and the interior penumbra, and that constitutes a whole icon of the place. 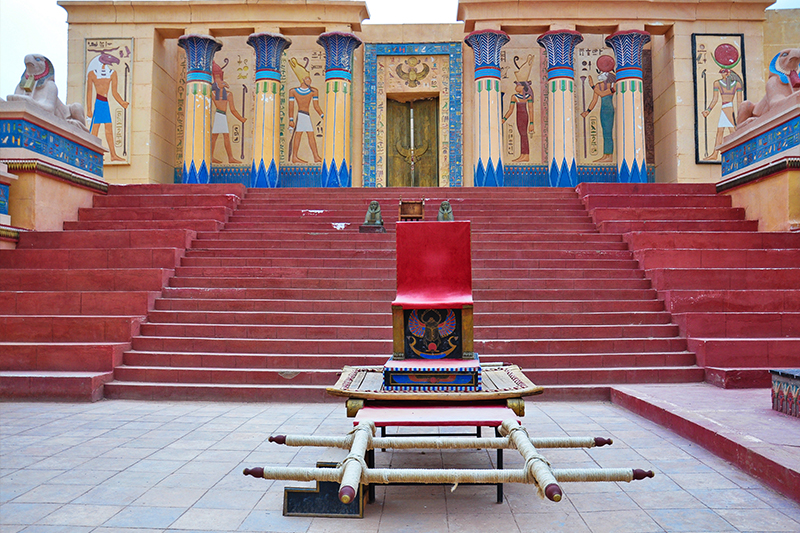 THE HOLLYWOOD OF AFRICA

Ouarzazate is the most developed city in the South of the Atlas and owes its status due to the presence of film industry studios.

The Atlas Corporation Studios opened in 1983 and are like the Moroccan Hollywood. Great films and blockbusters have been filmed here, including The Kingdom of Heaven and Gladiator by Ridley Scott, Alexander the Great, Asterix and Obelix by Alain Chabbat, Cleopatra by Frank Roddam or The Garden of Eden. You can visit these studios as long as there is no shooting taking place at the moment. You can still see the décor used in several films, see the facade of the Tibetan temple that Scorsese used for his film Kundun, the slave market that Ridley Scott used in Gladiator or the plane, somewhat scrapped, used by Michael Douglas in The Jewel of the Nile, by Lewis Teague. 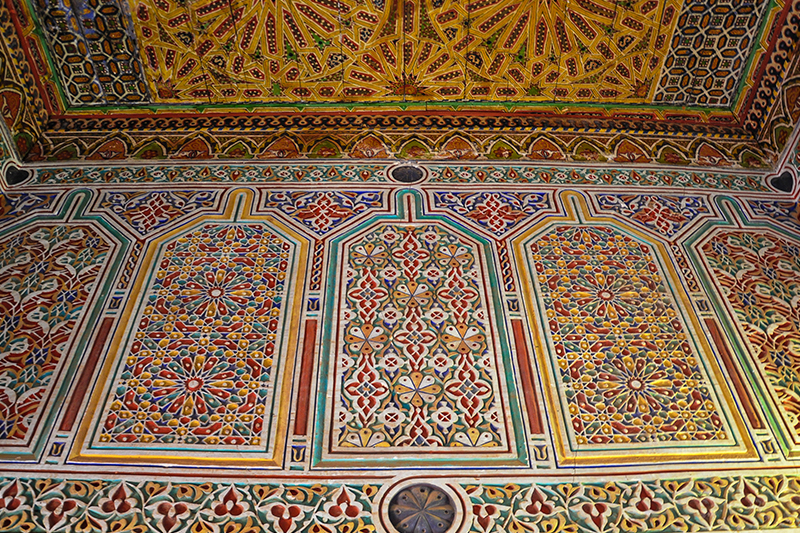 This impressive Kasbah declared a World Heritage Site by Unesco, was the residence of one of the most powerful governors of the region and is currently the headquarters of an organization responsible for the conservation of the architectural heritage of southern Morocco.

This Kasbah has a complex overlapping of walls and crenellated towers that form a true fortification and it is said that it was one of the most beautiful kasbahs in all of Morocco.

Belonging to one of the lords who dominated all the lands of the Atlas, the dimensions and sumptuousness were at least quite ambitious: when you look at it from afar, more than a palace it looks like a small adobe city.

Its towers have a very successful decorative work and is surrounded by walls with drawings of geometric shapes.

If you go during the visiting hours until 6 pm, we can take a guided tour inside. It will explain the use of each of the spaces, the prayer area, the spaces to receive visitors. Even, in some of the rooms you can see the detail carved on ceilings with cedar wood and the painted stucco. 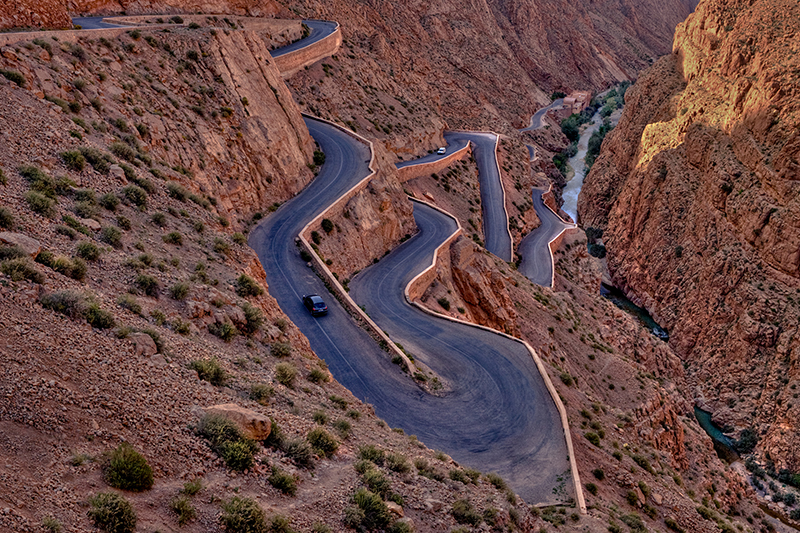 The Todra River passes through this deep crack and traditionally the water is used to irrigate the fields of palm trees, almond trees and olive trees.

The route by car is spectacular, with hundreds of Kasbahs that the Berbers erected to defend themselves against invaders and that are spread throughout the route, winding through impressive desert landscapes, villages, forests and palm groves.

This valley owes its name to the river that meanders nestled between the mountains along the route, backed by ocher, terracotta and red cliffs. A variety of landscapes that are really worth visiting.

The Dades Valley has a wild landscape, with snow on one side and a semi-desert, on the other. Its wild grandeur and supernatural silence can only be matched by the Grand Canyon. The Dades River crosses the valley along a winding road full of fruit trees, walnuts, wheat fields, palm trees, birches and almond trees, facing an extraordinary setting of spectacular rock formations.

Rarely does a road improve a landscape, but in the case of the Dades Gorges, the winding road that runs through it, gives it a plus of beauty and uniqueness. 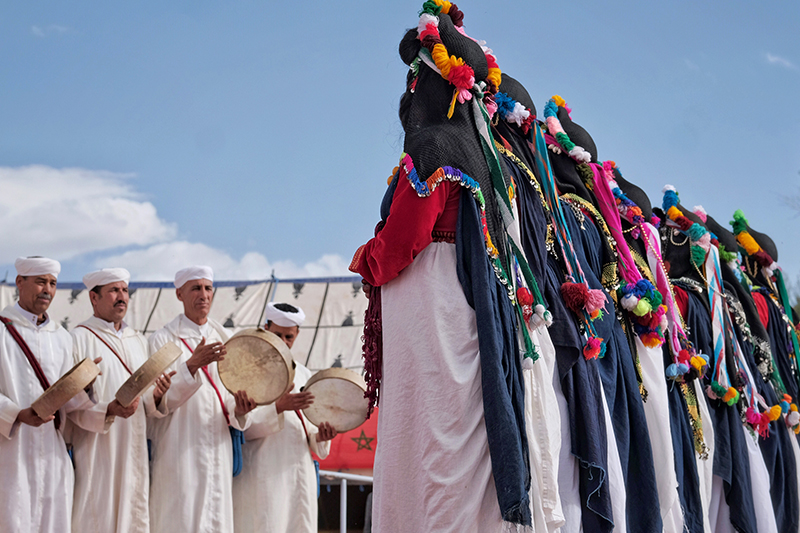 At the foot of the Atlas Mountains in the city of Kelaa M’Gouna, the Valley of the Roses was born where the Damascene species are cultivated.

The Valley of the Roses with its heady aromas is formed by hectares of rose bushes, whose aroma is appreciated throughout the month of May.

At this time of the year you can appreciate a dazzling and charming landscape.

The cultivation of roses, the distillation of essences and the production of perfumes are the most important industries of this place.

This place is well known for its «festival of the roses«, which takes place every year in the month of May. 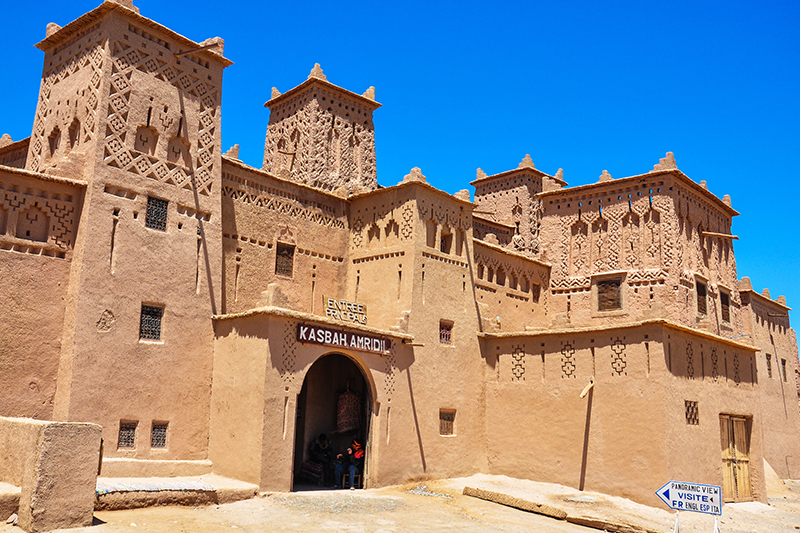 The palm grove of Skoura, is an oasis in the middle of the arid lands where palm trees or olive trees give the place a green touch.

In this green oasis, in addition to 700,000 palm trees, there is a great concentration of Kasbahs. Some of the best-preserved Kasbah are those of Ameridil, Ait Abú or Ait Ben Moro, the latter converted into a hotel. 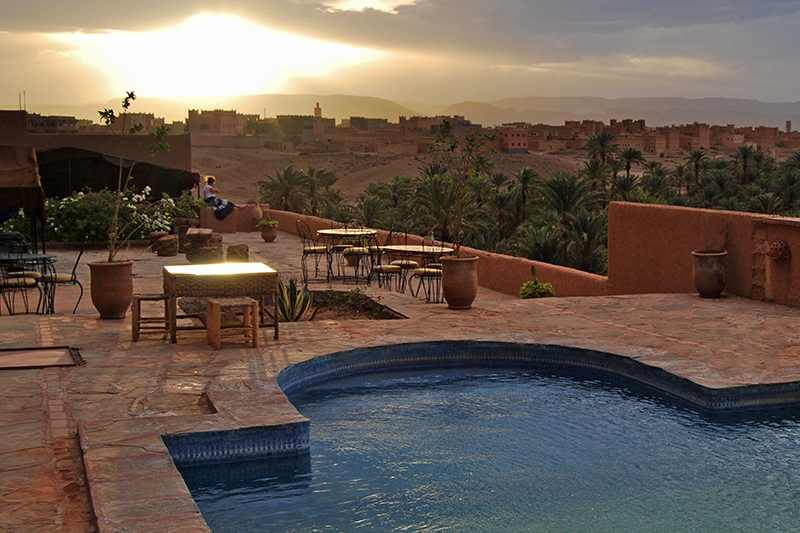 It is one of the oases located on the southern slopes of the Jebel Saghro mountains, which close the passage to the desert, receiving its steamy air and its winds loaded with sand that, over the millennia, have molded into its sandstone rocks a singular way.

This site is an important part of the history of the Berber tribes in this part of the country and where there are more than 40 Kasbahs, old towns and small towns that show the prominent role it had during the times of the route of caravan trade that were made to Tombuctú. 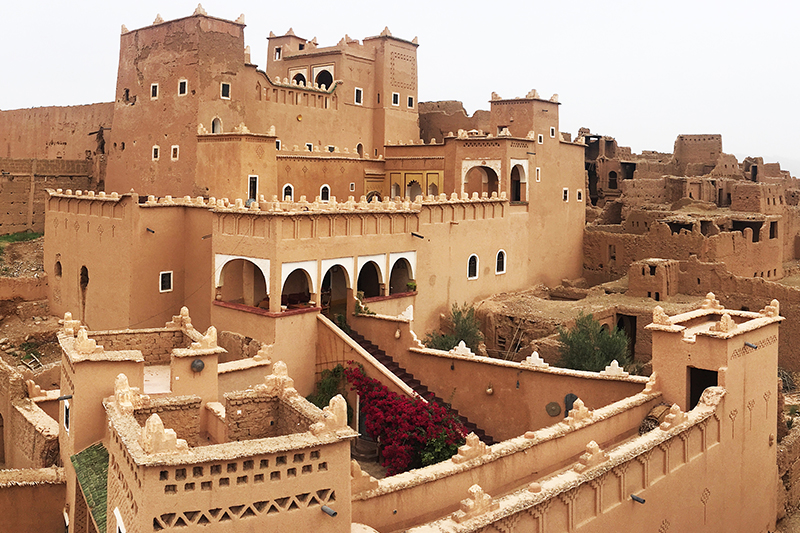 Agdz is located about 65 kilometers south of Ouarzazate and 92 kilometers north of Zagora.

Agdz, which means “resting place“, is located along the old caravan route linking Marrakech with Timbuktu and played an important role in the exchange of goods through the Sahara.