What to do and see in northern Morocco

From the North Atlantic and Mediterranean coast to the Rif Mountains, northern morocco offers quiet beaches, national parks, lively medinas and places with a lot of history. The North of Morocco offers the traveler an architecture and gastronomy that mixes the echoes of the old Spanish protectorate and the Berber culture: fortifications, modernist cities, Roman mosaics …

The city of Tangier located at the north end of the country is the main entrance of the country, thanks to the frenetic activity of its seaport.

From this city you can begin to be surprised by the irresistible exoticism and the variety of contrasts that Morocco has to offer.

The main tourist attractions that can be found in the North of Morocco are in the bohemian and coastal town of Asilah, in of Moorish and modernist city of Tetouan. In Chefchaouen, with its streets and facades painted in blue, in the Roman ruins of Volubilis, a must for lovers of ancient history and in the seaside town of Saidia, where the traveler can enjoy endless beaches of fine sand and that in recent years has become the summer destination with more than 300 days of sun a year. 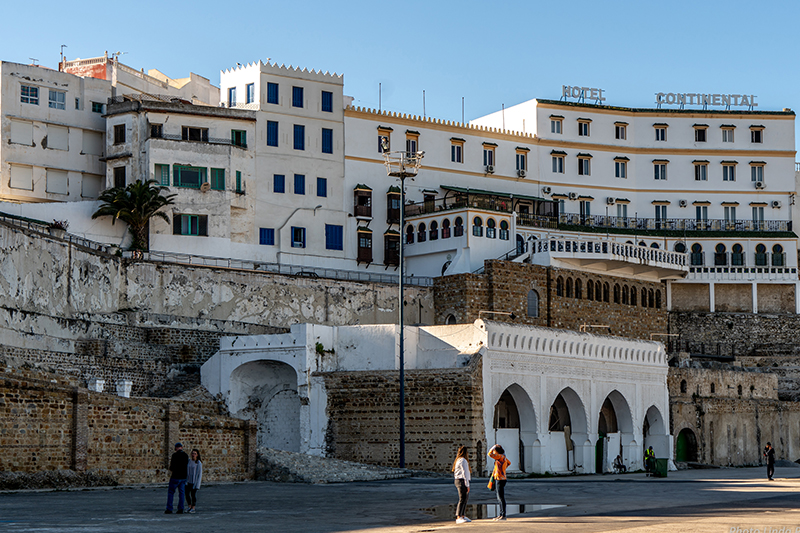 A place of passage between Europe and Africa, this legendary city is in full economic rise. Tangier, however, is a living example of a modern city that has known how to preserve and maintain its identity.

In a certain way, Tangier is reliving its past as a city of commercial and diplomatic relations, a refuge for artists and poets and continues to maintain the cosmopolitan footprint of the great travelers of the 19th century.

The city of the two seas that combines the blue of the Atlantic and the Mediterranean has always been a refuge for artists and writers.
The beauty of the location and its light bluish light have made it an object of inspiration for generations of artists among the greatest. Its streets, its hotels and its cafés have seen Tennessee Williams, Delacroix, Samuel Beckett, Jean Genet pass … their palaces witnessed the mundane parties of Barbara Hutton or Malcolm Forbes … their light inspired Matisse and her mystery inspired Paul Bowles; The white city has always will be known for making geniuses fall in love.

The narrow and zigzagging streets of the medina of Tangier, the houses with its paintings and its arabesque doors, the Tangerines who live in it and their local craft shops, make it well worth the time you spend visiting this city in the North of Morocco. 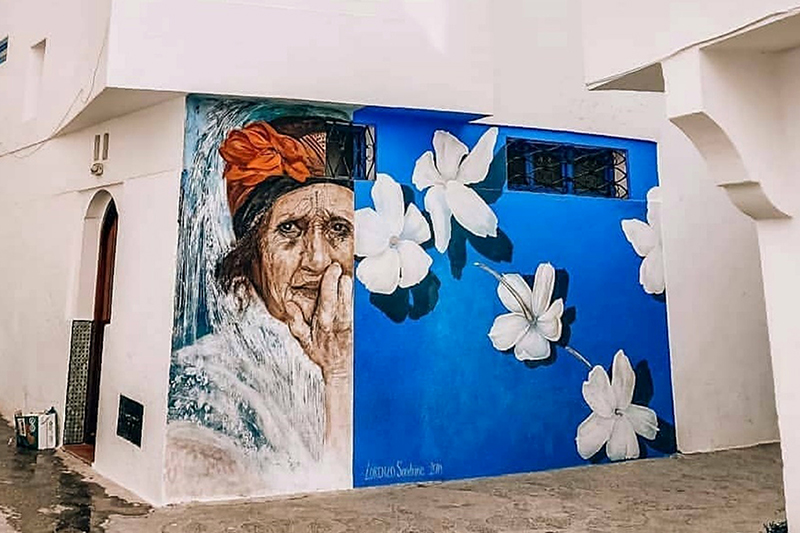 “There are places on Earth, where a special force or energy flows. They say, the aura of those places is different and it is perceived as if the colors there were brighter and brighter, and the senses expand their ability to perceive, and calm and tranquility emerge as a state of mind”

Asilah is a coastal city south of Tanger, in northern Morocco. Quiet and serene for some, majestic and magical for others.

The city was founded by the Phoenicians, but it also saw the passing of Carthaginians, Arabs, Portuguese and Spanish. Probably, the time to which Asilah owes it most is the one during the Portuguese presence, when, in the fifteenth century, the city became a commercial gateway for the Saharan gold route.

In addition, Asilah preserves some buildings from the time of the protectorate and the mausoleum of Sidi Ahmed El Mansur, a Saadí who reconquered the city after the Battle of the Three Kings.

The Medina has 3 doors:

The fishing port, where the bars and restaurants of Asilah are nourished, is famous for its catches of tuna and seafood, which are obtained not far from the coast, whose traditional fishing methods are still very ancient.

In the morning or at sunset, «Karakia» is the meeting place of Asilah’s youth, part of the Portuguese wall that acts as a viewpoint from which you can see the immensity of the Atlantic Ocean and enjoy the contrast of the crystalline sea with the force of the sun.

The City of Culture and Arts

Asilah is the quintessential cultural center of Northern Morocco, so there are no shortage of workshops and art galleries in the streets of its Medina. In addition, many artists, thinkers and intellectuals – Moroccans and non-Moroccans – have chosen Asilah as a place of residence, and that cultural environment is perceived in each of its corners.

Every year, during the cultural and artistic Moussem, the streets of Asilah are transformed into an authentic open-air museum.

The great event of cultural tourism is in August, when the city hosts the famous Asilah Cultural Festival, an international event where you can enjoy conferences, screenings, dance, cinema, music, poetry, theater and photo contests, among other activities.

The colorful murals left by artists on the walls of the Medina, used as canvases to display their imagination, with images full of emotions and energy, is the legacy that this festival leaves, year after year. Art is present all year in the streets of the medina of Asilah. 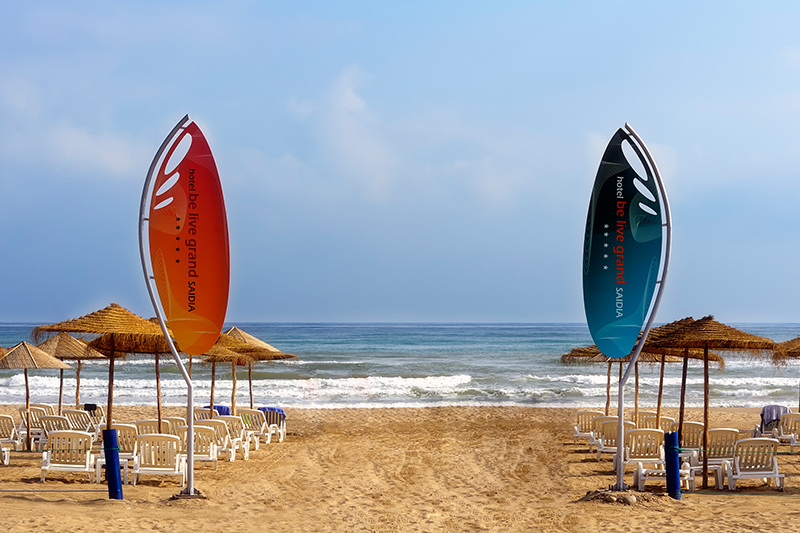 Saidia has the largest beaches in the country and one of the most important tourist complexes in North Africa.

This town almost on the border with Algeria has become in recent years an important and wellknown vacation spot.

The main attractions of the city are its more than 14km of white sand beaches, its medina, kasbah, corniche, the marina and the Mediterranea-Saidia resort, with 3 golf courses, luxury hotels, a shopping center and a Modern medina with many shops, restaurants and cafes. 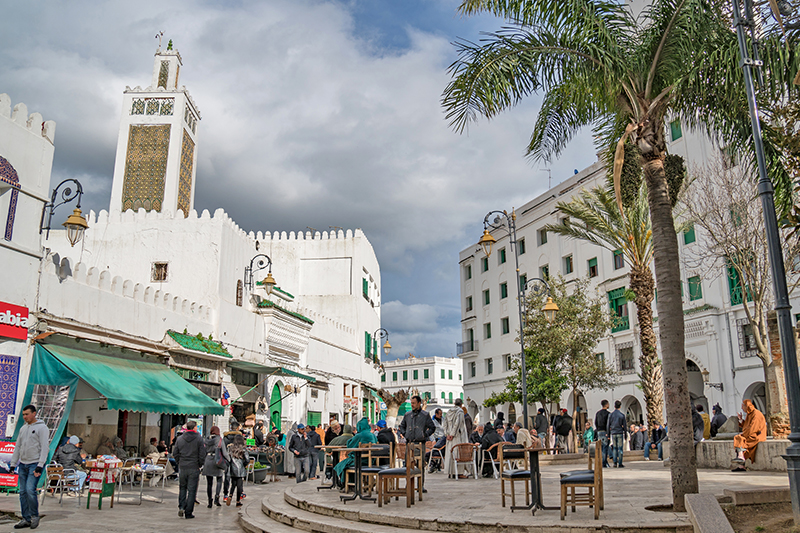 Located near the Mediterranean Sea, near Tanger and the Spanish city of Ceuta, Tetouan is the gateway to the impressive Rif mountain range.

The city extends along the slope of Mount Dersa and descends to the fertile valley of the Martil River. From a distance it stands out against the bottom of the Rif mountains with its white buildings, the towers, the terraces and the walls built in the seventeenth century by Sultan Mulay Ismail.

The medina is a maze of winding streets, lively squares and mosques …

Their Kasbah was declared a World Heritage Site by Unesco. The city maintained its medieval essences until the arrival of O’Donnell who modernized and modified some of its neighborhoods.

The new part of the city that the Spanish built during the protectorate was drawn in a grid with a splendid architecture that does not lack the influences from art deco, so fashionable at that time.

Tetouan fascinates with its beauty and the charm of this city is breathed by the hustle and bustle of its streets, its cafes, its souks and markets so different from the one in the western world.

Tetouan is a city to stroll, to have a tea with calm and in silence, while watching and listening to the bustle of the Tetuanis who go for a walk, especially at sunset, a habit acquired in the times of the Protectorate and that still continues. 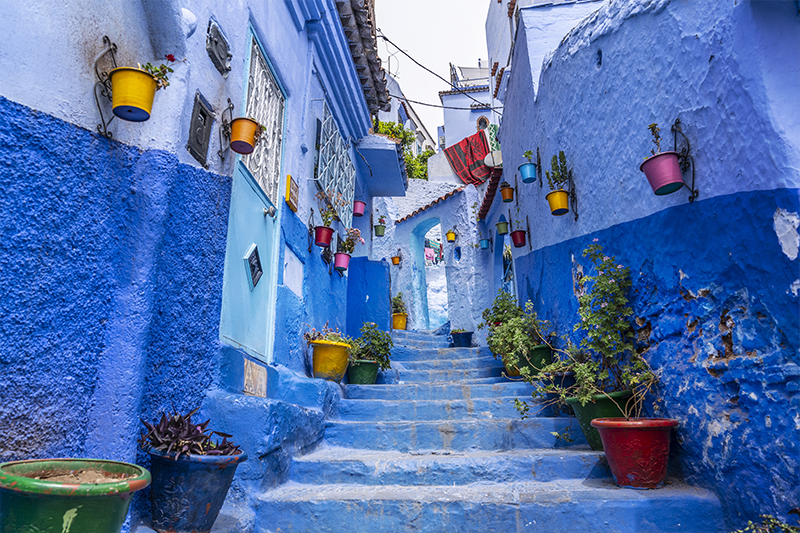 Chefchaouen is a charming little town of about 40,000 inhabitants that is located 100 km from Ceuta on the slopes of the Tisouka (2050m) and Megou (1616 m) mountains of the Rif Mountain Range, which rise above the village like two horns, giving the city its name Chefchaouen, that in beréber means: “look at the horns”.

At about 660 m of altitude and with very little car traffic, breathes a clean and fresh air that invites the traveler to stay and discover the beauty of the place and its surroundings.

Its Medina is quiet and small. If we enter it through some of its 5 doors and get carried away by our senses, we will feel flooded by many new sensations, like the smell of freshly baked bread from the wood oven or a Tajin ready to be eaten.

The great variety of colors of the different products from the stores and the bazaars contrast with the dazzling bluish white of the facades of the houses. The mixture of voices and unknown sounds will guide you through the serpentine alleyways until you inevitably reach the meeting and resting point, Uta el-Hammam Square. 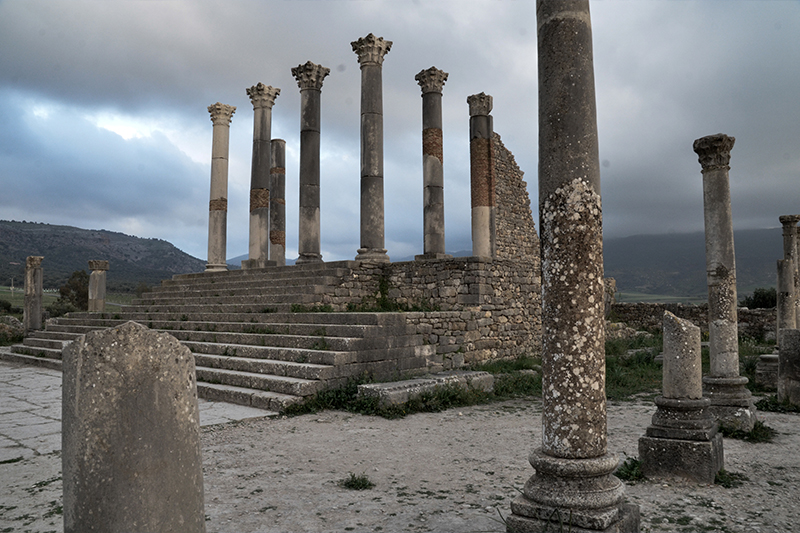 Volúbilis is an ancient Roman city where the best preserved and most visited archaeological remains of Morocco are found.

Although its best to walk while discovering the ruins, there are some points that cannot be missed:

Forum, Basilica and Temple of Jupiter, the Baths, the Arch of Caracalla, built in marble in the year 217, and Los Mosaicos, undoubtedly the most famous of Volúbilis.