What to do and what to see in the Atlas Mountains

The Atlas is a mountainous system that travels, along 2400 km, the northwest of Africa, from Tunisia to Morocco

The population of the Atlas in Morocco is mostly Berber.

The Atlas separates the coasts of the Mediterranean Sea and the Atlantic Ocean from the Sahara Desert and is one of the factors that causes the dryness of this desert.

In the majestic Atlas mountains you can find peaceful valleys dotted with Berber villages, the ski resorts very close to the university town of Ifrane, mountain passes that run along winding roads such as the Port of Tichka, snowy peaks from October to May as it happens on Mount Toubkal, monkeys that roam freely in the forests of Azrou, and traditional Berber festivals such as the Moussem de las Novias de Imilchil that end up becoming more of a journey in time than in space. 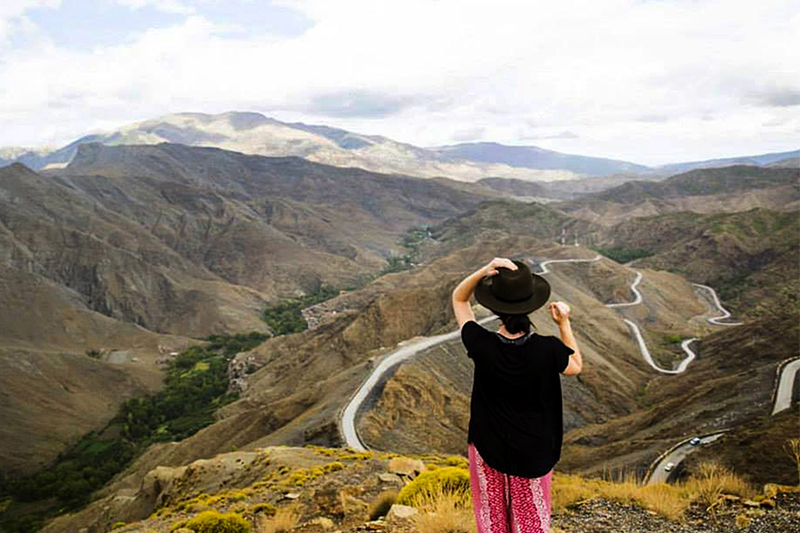 MOUNTAINS OF THE HIGH ATLAS AND PUERTO DE TICHKA (2260m)

The port of Tizi n’Tichka is a Moroccan mountain pass that crosses the Atlas Mountains. The North face looks towards the cosmopolitan city of Marrakech and its southern face to the Sahara Desert.

This port reaches 2,260 meters above sea level, being the highest port in Morocco.

THE SWITZERLAND OF MOROCCO 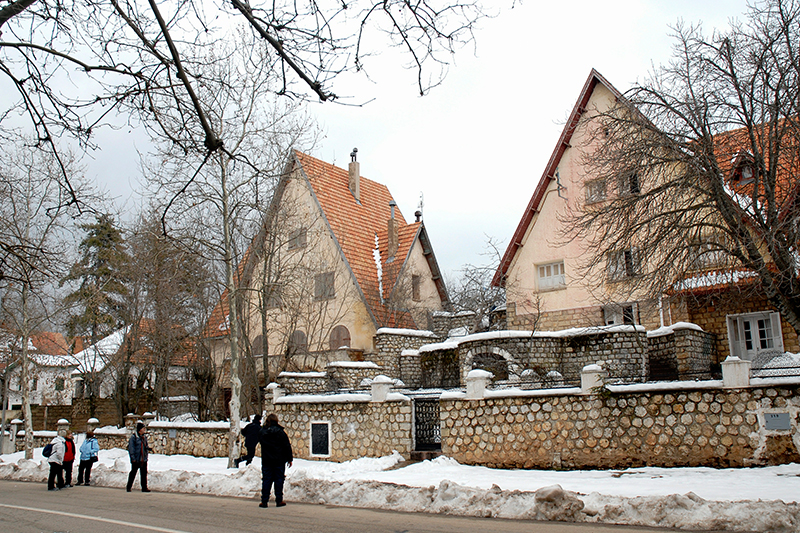 80 kilometers from Fez, on the middle Atlas, is Ifrane, a small city with an Alpine style located at the bottom of an ancient crater and surrounded by mountains with trees, at an altitude of 1650 meters.

It was created in 1930 inspired by the architecture of the Alps and as a mountain resort with an European style and a pleasant atmosphere.

There is a large Royal Palace, Al Akhawayn University (AUI), a military school and many luxury villas that are scattered around the city garden surrounded by trees and well-kept streets. It is a leisure city for summer and mountain sports.

In the center of the city there is a lake surrounded by forests, next to which we can see the Lion of Ifrane or Lion of the Atlas, a stone sculpture where tourists take a souvenir photo making it an icon of the place. 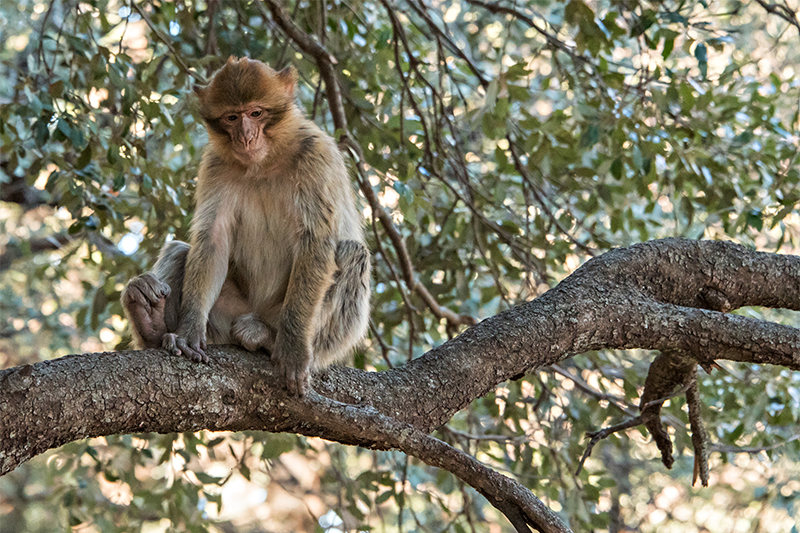 MONOS IN THE WILD

Azrou is a Berber town located in the Middle Atlas. The most famous points of interest of the town are the cedar forests that surrounds it and the macaques that inhabit them. 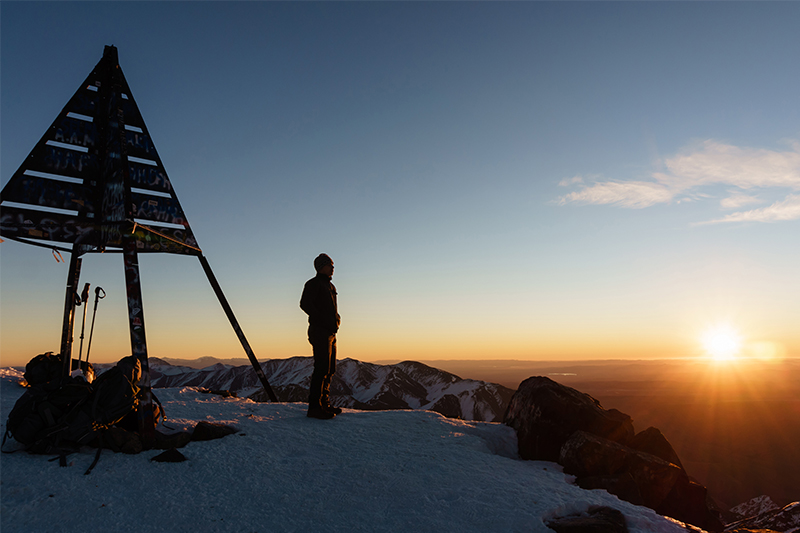 Very close to Marrakech, about 60 km, is the imposing mountain range of the Toubkal, which constitutes the heart of the Western High Atlas.

It is the highest peak in Morocco and in all of North Africa, whose peak reaches 4,165m and where you can find snow practically all over the year.

The most common way to ascend the Toubkal is to start from the Berber village of Imlil and ascend to the shelters located at 3200m, right at the foot of a huge canal that reaches the top. Its ascent is only advisable for people with healthy physical conditions and with some preparation and experience, since although the route does not pose technical difficulties, adverse weather conditions or altitude sickness can play a trick on you, if you are not sufficiently prepared. 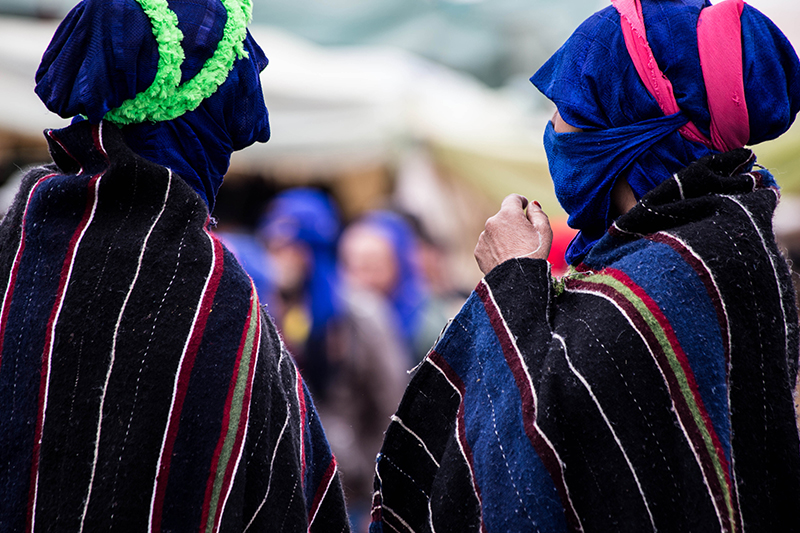 Imilchil is a town located in a high Atlas high plateau, a central High Atlas natural park, in the valley of Assif Mellou, at more than 2200 meters of altitude. In its surroundings all the mountains of the area exceed 3000 meters, which makes it practically inaccessible during the winter months due to the harsh weather conditions. Its normal being isolated for days due to heavy snowfall and with temperatures that can reach the -15 C.

The Imilchil area is the home of the Berber tribe Ait Haddidou, that are mostly nomads of the mountains

Its best-known attraction is in the Morabito of Sidi Ahmed Oulmghani where one of the most famous Moussem de las Novias or Bride and Groom Party is celebrated, a celebration in which the tradition is combined with souks, musical presentations, traditional dances and various cultural activities.

It is celebrated during the third or last weekend of September, coinciding with the end of the harvest, with the celebration of a collective wedding in front of the Morabito, where large white jaimas are mounted forming a kind of street.

Marriage women wear their clothes, traditional blankets made of wool, black and white or black stripes with fine colored lines; the widows or divorced are shown with a cone-shaped headdress and the tirbatine, the girls entering the society, wear a flat hairstyle.

Men dress elegant, with white or light-colored suits, and cover their heads always with a white turban.

The party is to find a partner; if two people like each other approach and he says to her: “Tc chent rate nou” which translates as “you have gotten into my liver” to which the woman responds: “Quia quii rate nou” which means “you equal ”, And if they wish, they get married during the party. But not until death do them part.  After a year, if any of the spouses wants to separate, they can do it simply by returning to their family or marrying someone else during the next celebration.