What to do and see on the Atlantic Coast

The Atlantic Coast of Morocco has kilometers of fine sand beaches, fishing villages and coastal cities.

Its wild nature combined with the subtropical climate and trade winds have made it the preferred destination water sports lovers, such as surfing or kitesurfing.

Beaches for all tastes, virgins, exotic, local, fot the family or to chill out, where you can relax and enjoy a well-deserved rest.

From the unknown but no less attractive city of El Jadida, a former Portuguese fortress, to the wild nature beach of Legzira, one of the most impressive on the entire African Atlantic coast, you will find different destinations where you can lie in the sun, stroll through its medinas, enjoy magnificent sunsets or practice your favorite water sport.

In the picturesque fishing village of Oualidia, spread around a beautiful crescent-shaped lagoon and protected from wild waves by a rocky breakwater, you can taste its famous oysters. You may buy all kinds of ceramic and pottery objects in Safi, surf and kitesurf on the beaches of Sidi Kaouki, Essaouira and Taghazout or relax at a resort in the modern and cosmopolitan city of Agadir. 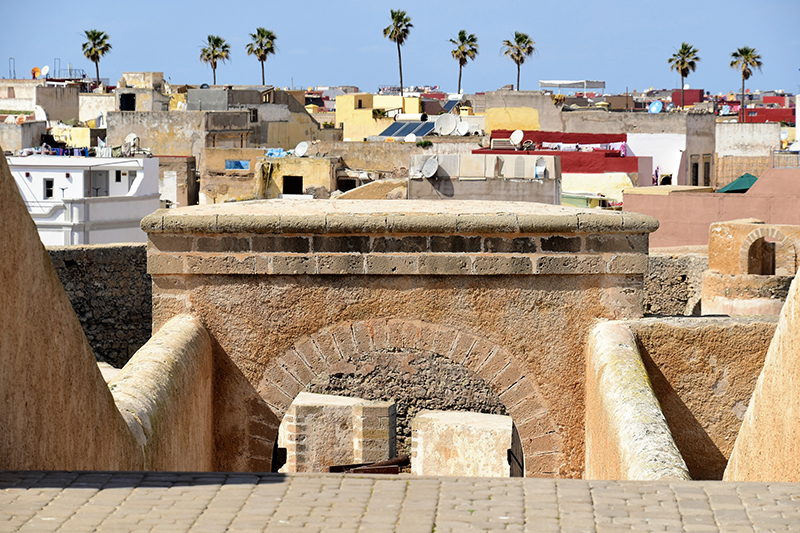 EL Yadida or El Jadida whose name means “the new”, has nothing to do with its name, since this city was the former Mazagán, one of the most beautiful cities on the entire Atlantic coast of Morocco.

The Portuguese had this city for 250 years. After the capture of the neighboring city of Azemmour in 1514, the Portuguese decided to build here a fortress called Mazagán, which quickly became the center of maritime traffic of the Kingdom of Portugal as well as the fortified medina surrounded by a moat that isolated the citadel making it impenetrable.

This citadel, surrounded by a crenellated wall and defended by bastions, is one of the most interesting points of the city, and its protected by the UNESCO.

After its occupation by the Alawi sultan Sidi Mohammed Ben Abdallah, the city is renamed El Brija El Jadida (The New Fortress) and a new city begins to grow outside the walls.

The citadel retains until today its charm and its original structure, typicaly medieval, and hides in its entrails, one of the masterpieces of the architecture of the XVI century: «the Portuguese Cistern«.

This jewel is located on Mohamed el-Hachmi Bah Bah street, This structure was first used as a warehouse and then converted to an underground cistern of the early 16th century, supported by rows of pilasters that support a vaulted ceiling, that its particularly beautiful when the sun’s rays penetrate through the skylight, reflecting on its shallow water. 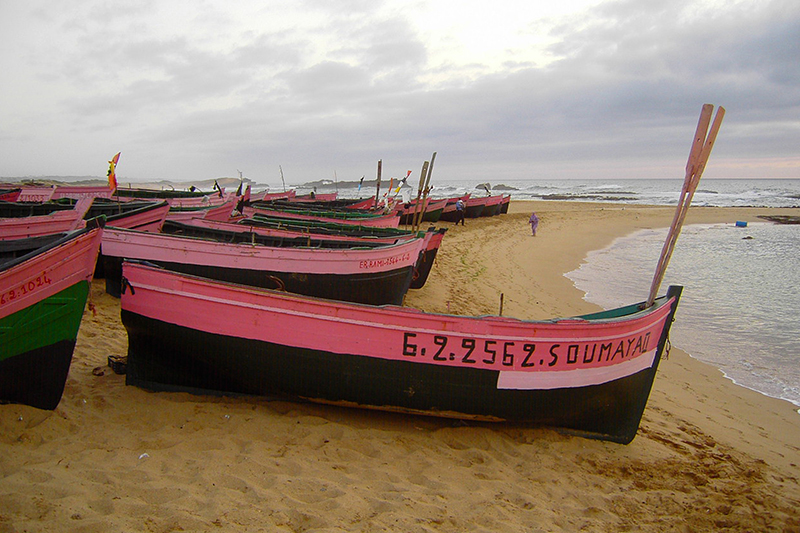 City traditionally dedicated to artisanal fishing and ostreiculture (oyster farming), located in a picturesque wide lagoon protected from the ocean, where fish and seafood abound. 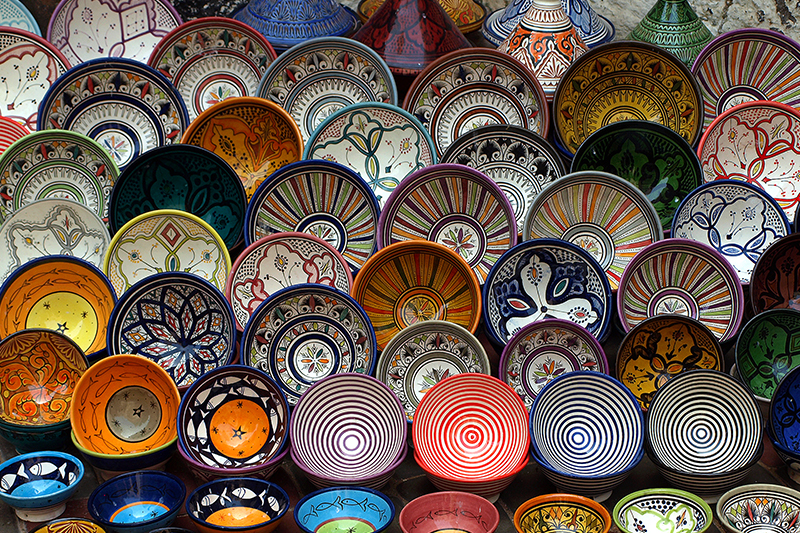 Safi is one of the largest sardiner ports in the world. The activity is also a daily show, when the ships arrive at the docks to unload their cargo.

Apart from fishing, the best-known activity of the city are the famous Safi pottery.

In the potter’s neighborhood it is still possible to see the furnaces and workshops of the artisans who have made the reputation of Safi pottery, and walk along a gallery with a complete collection of the traditional blue and white ceramics.

THE PEARL OF THE ATLANTIC 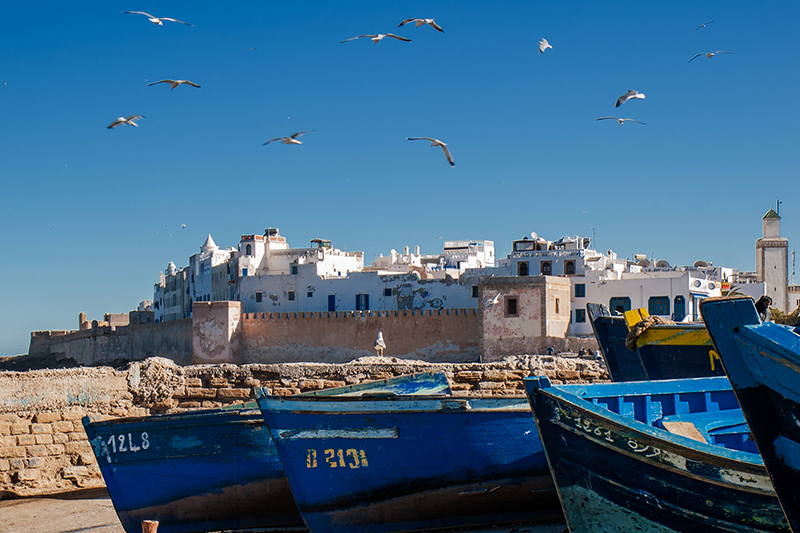 Essaouira has an exotic and at the same time familiar look, accompanied by the incessant squawks of the seagulls that fly over the city. At first it may seem that you are in a city of the French Brittany, however, once you cross its walls you find that is infinitely a Moroccan city.

Narrow streets with the smell of fresh fish that melts with the wet ocean breeze mixed with the aromas of spices and madra, and the sound of the Gnaoua drums that resonate in shops and houses, Essaouira is with no doubt, a place with character.

The city is known by its walls, its medina (declared a World Heritage Site by UNESCO in 2001), its alleys, watchtowers, monumental access doors, whitewashed walls that gives it a Mediterranean touch, blue windows, and by the workshops of artisans and painters, their exotic cafes and exquisitely decorated shops.

The fishing port stands out with total supremacy the color blue. This is the color that, according to experts and fishermen, sardines are best tricked and that facilitates their capture.

An incredible peace floods this place while the seagulls break the silence. Frantic, bright and cheerful colors blend with old multicolored networks.

The Port Scale, Skala du Port, is located next to the fishing port and has a great view of the bay of Essaouira, the fortified medina and the island of Mogador, right in front and less than 1 kilometer away.

It is a continuation of the wall of Essaouira and is composed of two rectangular fortified towers. Inside this walled enclosure you can see the old bronze canyons, which were manufactured by the Spanish and the Portuguese and that served as a defense against invaders coming through the ocean.

The trade winds, or tars in Berber, are the true masters of this walled city.

Its nickname as “The wind city” or “The city of the trade winds” is due to the omnipresence of the wind, which delights all fans of sports such as surfing, windsurfing and kite surfing that meet on the beaches of the surroundings to practice it, and for which this place is a true paradise.

If there is an art that defines the city, that is undoubtedly the music. Essaouira is the cradle of Gnaoua music, originate from the black slaves that the sultan brought from his wars.

In Essaouira there are three important festivals that encourage the cultural life of the city:

The Printemps Musical des Alizés, in April, dedicated to classical music is celebrated. It is totally free and lasts 4 days.

The Festival des Andalousies Atlántiques that takes place during 3 days in September and is dedicated to the cultural exchange between Morocco, Spain and the South American countries.

The festival that has given real popularity to the city is the Gnaoua et Musiques du Monde Festival that takes place over 4 days and whose concerts and shows take place in various natural settings. 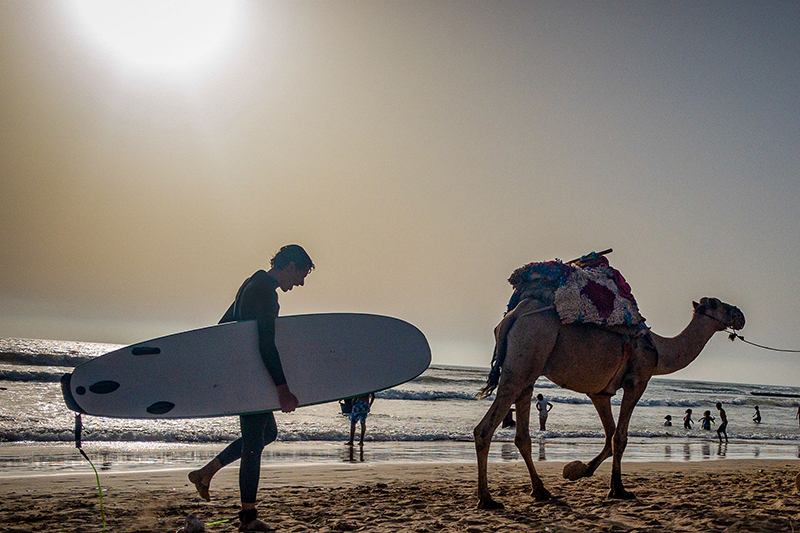 26 km south of Essaouira is the white sand beach of Sidi Kaouki that is very popular among surf lovers and that nowadays became a hippy, informal and bohemian refuge.

An oasis of peace along the sea, sand, wind and dromedaries!

Its sunsets are impressive. 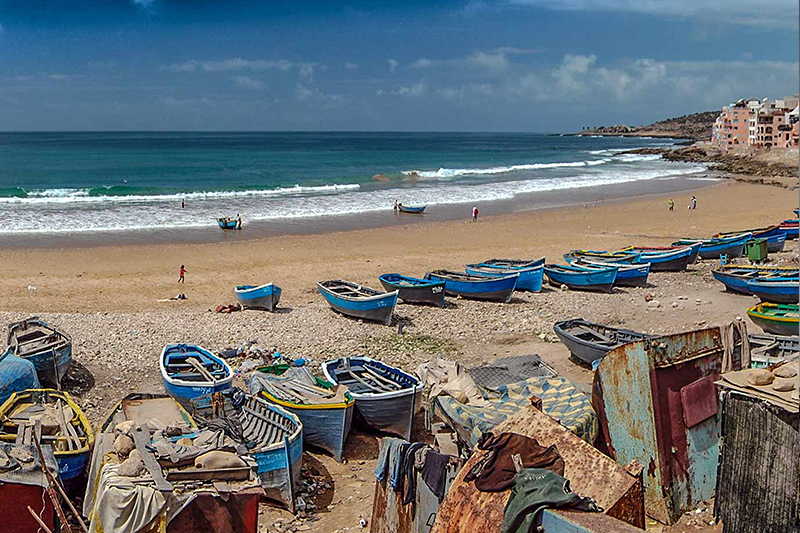 A few kilometers north of Agadir, the fishing village of Taghazout has become a Mecca of surfing.

Its coast has some of the best surfspots in Morocco 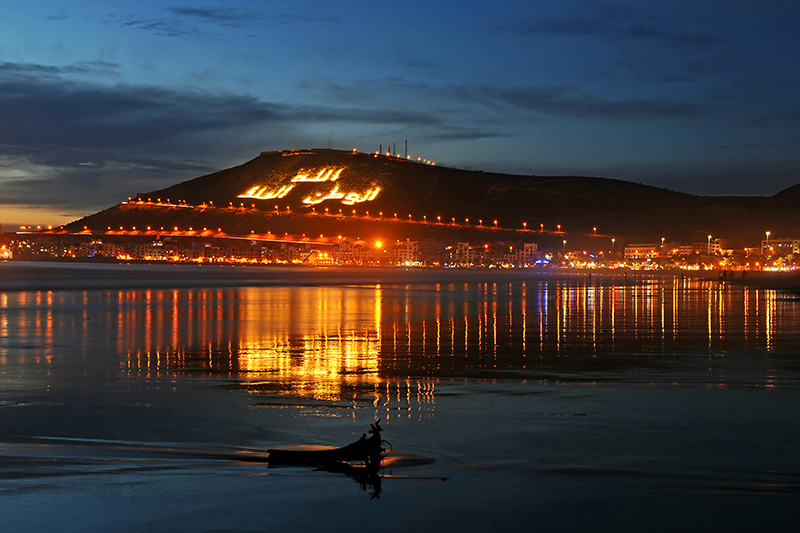 Agadir is a lively, cosmopolitan and modern coastal city, with important hotel chains, cafes that gives the city a European style and touch.

It has excellent clean beaches, first class golf courses, health and beauty spas and its subtropical climate allows you to enjoy mild and pleasant temperatures throughout the year

Agadir has become the most popular resort in Morocco, and is an ideal place to practice rod and underwater fishing. 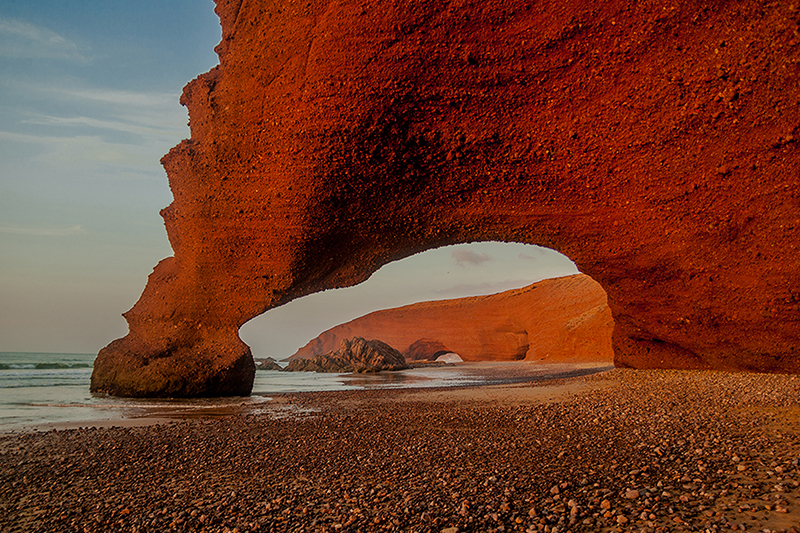 One of the most impressive beaches on the African Atlantic coast is Legzira Beach. Its uniqueness comes from the presence of two large natural stone arches. A fascinating place!

Legzira beach extends along 8 km of rocky and steep coastline, tirelessly beaten by the wind and exposed to pronounced tides.

The two colossal arches can only be accessed at low tide, but it is worth waiting until the water descends and strolling through a unique place.