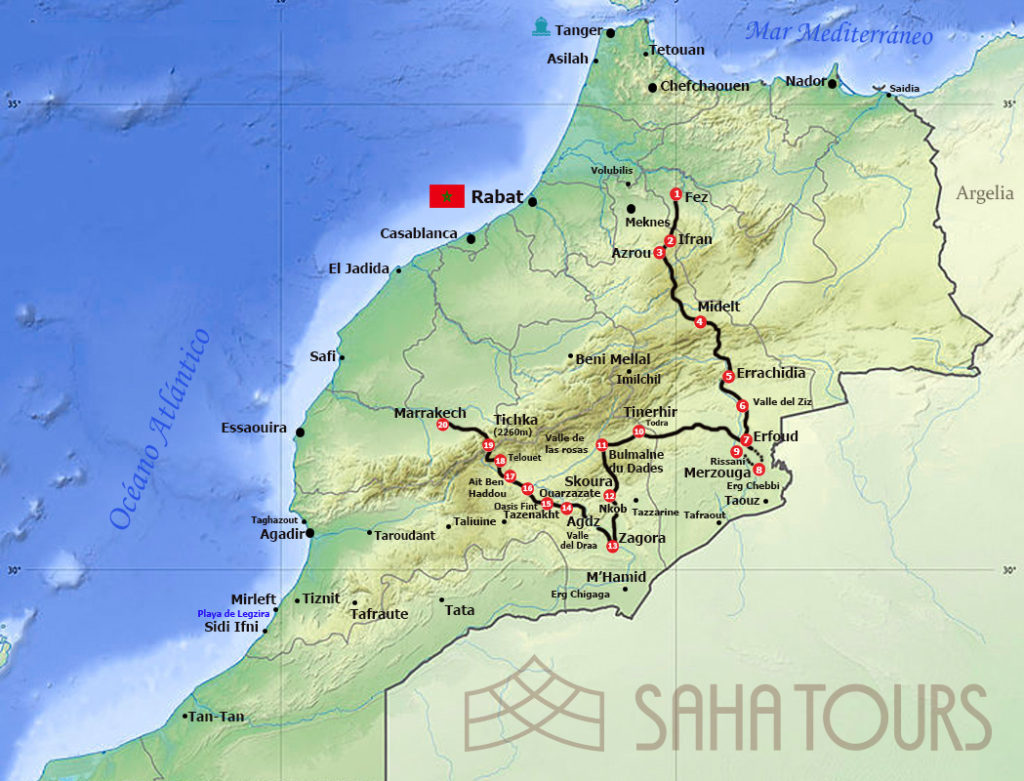 In the morning, meeting with the guide at your accommodation in Fez, at 8 am.

We will begin our journey to the desert through the university city of Ifrane, better known as the “Moroccan Switzerland”, one of the favorite cities of the King of Morocco, the cedar forest and the macaques of Azrou and the Atlas landscapes, until we reach Midelt.

Free time for a well-deserved rest.

After breakfast, and at the time previously agreed with the guide, we will resume the route to the desert, crossing the lake of Errachidia and the extensive palm grove of the Ziz Valley, where we will make a stop to contemplate these beautiful panoramic views.

We will continue through the Ziz Valley until we reach Erfoud, a city nestled almost at the gates of the desert and the starting point for the vast majority of excursions to the famous dunes of Erg Chebbi. Erfoud is also known for the celebration of the Festival of dates that takes place every year during October and a colorful moment full of Berber traditions.

After passing several tracks and desert landscape we will arrive at the place where we will change from our vehicle to the dromedaries, the true kings of the desert, who will lead you with their leisurely and rhythmic step to our camp in the dunes. During the dromedary ride you can see the sunset making a stop to enjoy one of the magical moments of the trip.

Arrival at the camp, followed by a traditional Berber dinner, accompanied with the rhythm of drums, under the moon and the stars, surrounded by dunes and accompanied by a campfire.

Day 3 - Merzouga - Rissani and traditional market to witness local trade exchanges - Khamlia and demonstration of traditional Gnaoua music - Mountain of galb nass (the mountain of the heart of the people) - Relaxing afternoon to enjoy the last sunset in the desert, for a walk in the dunes, for relaxing in the hotel pool or for optional activities (quads, buggies ...)

Whoever wants it, can get up early to see the sun rise and not miss the unique opportunity to see a sunrise that can be enjoyed in few places on earth.

After breakfast, we will return with the dromedaries to the place where our vehicle will wait for us to take us to Rissani, where we will have the opportunity to witness first-hand local trade, and the animal market.

Then we will go to Khamlia to witness a demonstration of traditional Gnaoua music by the Khamlia Bambaras group and then we will visit a place that very few know and that it will soon become a strategic enclave to take panoramic photographs of the entire desert: GALB NASS, which in our Berber language (tamazight) literally means the mountain of people’s hearts.

Today we will have the afternoon free to take a relaxing walk in the dunes or enjoy the last sunset in the desert, to perform optional activities (quads …) or simply for a rest in the hotel pool.

Farewell dinner in the desert.

We will say goodbye to the dunes and take the road to Tineghir and Todra. We will make a stop to visit its gorges perched at 1,350 m altitude and surrounded by a palm grove, until we reach the city of Boumalne, where the other gorges called Dades were formed.

A beautiful route through valleys, Berber villages, kabashs and a landscape of contrasts between palm trees and vegetation.

Today we will spend the night surrounded by mountains, Kasbahs and Valleys.

After breakfast, we will go through the Nkob Oasis, located on the southern slopes of the Jebel Saghro mountains, with more than forty Kasbas built at the beginning of the 20th century by the Ait Attá families although several of them have been rehabilitated as hotels.

Arrival in Zagora, former Almorávide fortress that controlled the Saharan commerce and was the exit point of old caravans.

After breakfast, we will start the route towards Ouarzazate, passing through Agdz, a city dominated by the hill in the shape of Tallinn, Jebel Kissane, 1535 meters high.

This agricultural city was of great importance in the past as a resting place for the old caravans that crossed the Atlas and headed south and offers beautiful landscapes in its surroundings.

Arrival in Ouazazate for a well-deserved rest.

In the morning, optional visits to the Universal Film Studios and the Kasbah Taourirt.

Next we will visit the Fint Oasis, taht in our Berber language means “hidden.”

If the city of Ouarzazate is considered the “Desert Gate”, then the Fint Oasis, located 10 kilometers south, could well be considered the desert garden.

Finally, we will arrive at the ksar of Ait Ben Haddou, the fortified town formed by kasbahs built in the most emblematic adobe in Morocco. It dominates the Ounila river valley and is one of the many magical places in Morocco. Considered a World Heritage Site by UNESCO since 1987, this set of Kasbahs is one of the best preserved, older and more splendid ksars of the country.

The best views are from the top of the hill, with the palm grove, the high Atlas and the desert at our feet. To get there you have to climb a ladder between the narrow streets of the Ksar; The sunset from this point is delightful.

Cinema lovers surely know that this fortress has been immortalized in many films, being one of the most cinematic places in Morocco.

Here scenes from a long list of films have been filmed since the 1960s, including: Lawrence of Arabia, Jesus of Nazareth, The Last Temptation of Christ, The Mummy, Gladiator, Alexander the Great and most recently the Game of Thrones series.

As a curiosity, one of the monumental gates of the ksar is not original, as it was built in concrete so that Michael Douglas crashed with the plane in The Jewel of the Nile.

After breakfast, departure from Ait Ben Haddou to go to the High Atlas Mountains where the Kasbah Telouet is located, with an Andalusian style and located at an altitude of 1650 meters we will find the most photographed window of all Morocco.
We will cross the High Atlas Mountains with its beautiful landscapes through the Port of Tichka located at 2260m and we will arrive in Marrakech for a well-deserved rest or to start enjoying the magical atmosphere of this city.

Transfer to your accommodation.