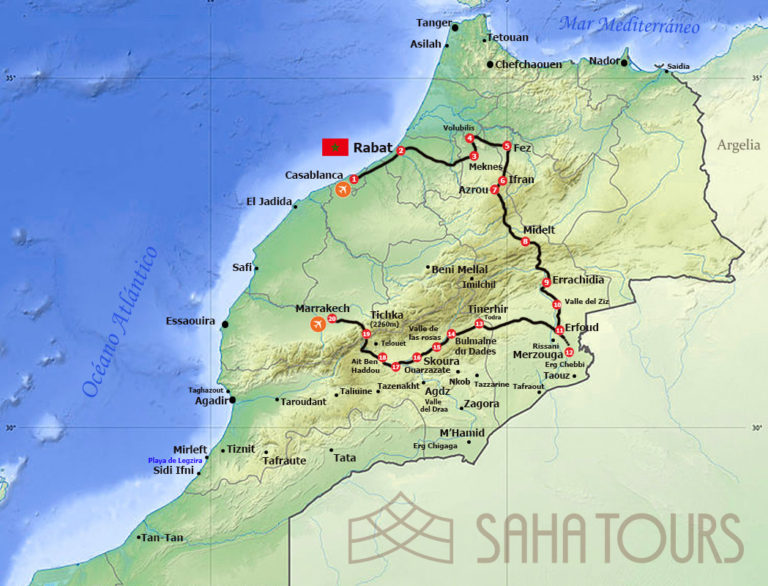 Welcome at the Mohammed V airport in Casablanca and meeting with the accompanying guide.

Visit to the exterior of the Hassan II Mosque, whoever wishes may make the optional visit of the interior. Then we will go to Rabat, the political and administrative capital of Morocco, to visit the Mausoleum of Mohamed V, the Hassan II Tower and the Kasbah Oudayas. Free time and rest or to continue enjoying at your own pace in the city.

Breakfast. Departure to Meknes, free visit to the city, that has is name linked to the name of Moulay Ismail, the great sultan of the Alouita dynasty. Visit to the walled Medina of the city, the Bab Mansour gate and the Hedim square.

Next, arrival in Fez, cultural and religious capital of the country.

Free time for a first contact with the city and its medina.

In the morning, at the time previously agreed, departure for the tour with a Fez local guide, the oldest of the Imperial Cities of the country that will lead us to the doors of the Royal Palace, a tour in the Jewish quarter, the impressive Medina, with its typical shops and artisan neighborhoods, the neighborhood of the dyers, the exterior of the Mosque, the Koranic School, Al Bouanania, and El Quaraouiyne University.

After breakfast, we resume the route to the desert through the university city of Ifrane, better known as the “Moroccan Switzerland”, one of the favorite cities of the king of Morocco, the cedar and monkey forest of Azrou and the Atlas landscapes, until we reach the Ziz Valley, an extensive palm grove. We will arrive in Merzouga and change from our vehicle to the dromedaries to take a ride to the bottom of the dunes, contemplate an unforgettable sunset and spend the night in a Berber camp. Typical dinner at the rhythm of drums. This will undoubtedly be a magical night!

We will say goodbye to the dunes and head towards Erfoud from where we will take the route to Tineghir and Todra. We will make a stop to visit its impressive gorges perched on 1,350 m of altitude and surrounded by a palm grove, and then reach the city of Boumalne, where the other gorges called Dades were formed.

A beautiful tour through valleys, Berber villages, kabashs and a landscape of contrasts between palm trees and vegetation.

Today we will spend the night surrounded by mountains and valleys.

After breakfast, and after passing the Valley of the Roses and the city of Ouarzazate, located on a large plateau, we will visit one of the best Ksurs – if not the best – and best preserved in Morocco: Ait Ben Haddou, a fortress town built in adobe, scene of a multitude of films and declared a World Heritage Site by Unesco.

Continuation of the route through the High Atlas, crossing the Port of Tichka (2260 m) surrounded by stunning mountains. Arrival in Marrakech and transfer to hotel or Riad.

Time for a well-deserved rest or for a first contact with the city.

Free visit of the DJemaa el Fna Square and the medina, the heart of the city. A unique experience, where all the life and night activity is concentrated: dancers, storytellers, jugglers, artisans, merchants and snake charmers. From the terraces of some cafés you get a wide view of the city: mosques and minarets, palaces and gardens, souks and bazaars.

In the morning, at the time previously agreed, the local guide will pick you up at your accommodation to start cultural visit of the most emblematic and tourist places of the city.

The visit of the monuments and tourist places is done by foot and accompanied by an official guide of the city.

And finally, the DJEMAA EL FNA PLAZA, which is the central square of Marrakech and the most important place in the medina. Is the center of the public life of Marrakech during the day and night. The best thing about DJemaa el Fna Square is the transformation that is going on during the day.

Depending on the expected flight departure time, free time for the last visits and purchases.

The visit included in this itinerary with a local guide is in the Imperial city of Fez, a city that we consider essential to know accompanied by a local guide from this city, and in Marrakech. The rest of the cities included in the program will be carried out freely and at your own pace to give you greater freedom. If you wish to include the visit of other cities with a guide, he must be hired separately as an optional activity.