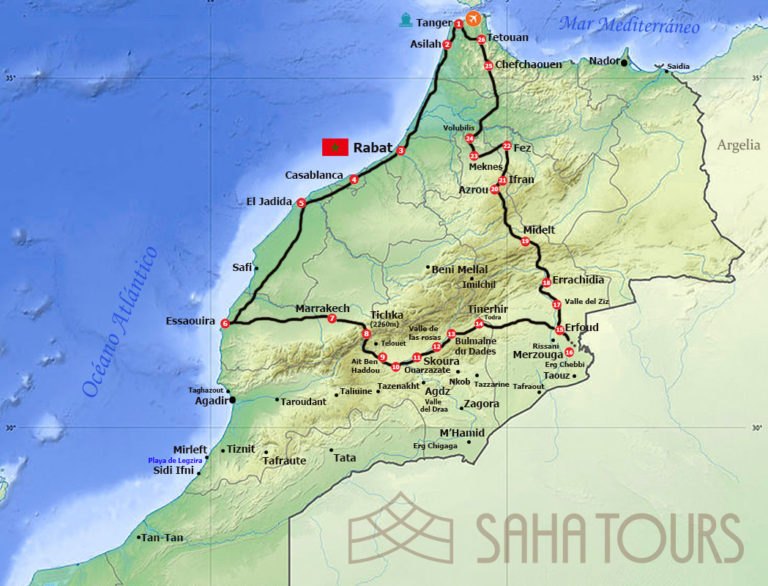 Welcome at the port or airport of Tangier and meeting with the accompanying guide.

Start of the tour with a first stop in Asilah, a beautiful coastal town that has a beautiful medina, endless virgin beaches and welcoming people.

Free time to enjoy the charm of Asilah.

After breakfast we will go to Rabat, the political and administrative capital of Morocco, to visit the Mausoleum of Mohamed V, the Hassan II Tower and the Kasbah Oudayas.

Free time for a well-deserved rest in the hotel/riad or to continue enjoying the city at your own pace.

After breakfast departure to Casablanca.

Free visit to the exterior of the Hassan II Mosque, whoever wishes may make the optional visit of the interior. Next we will go to the coastal town of Essaouira known as the Pearl of the Atlantic.

Arrival in Essaouira and free time to visit its medina, fishing port and beaches.

After breakfast we will go to the “Red City”, Marrakech. Along the way we can observe hundreds of argan trees and visit, if you wish, a women’s cooperative where the famous and precious argan oil is still handcrafted.

Transfer to the Hotel / Riad.

Free visit and at your own pace of the DJemaa el Fna Square and the medina, the heart of the city. A unique experience, where all life and night activity are concentrated: dancers, storytellers, jugglers, artisans, merchants and snake charmers. From the terraces of some cafes you get a wide view of the city: mosques and minarets, palaces and gardens, souks and bazaars.

We recommend sitting in one of the surrounding cafes to enjoy the atmosphere or go to dinner at one of the more than 100 stalls that are placed at this time and with different types of Moroccan food.

Full day free to discover the city or to have an optional visit with a local guide.

And finally, the DJEMAA EL FNA PLAZA, which is the central square of Marrakech and the most important place in the medina. Is the center of the public life of Marrakech during the day and night. The best thing about DJemaa el Fna Square is the transformation that is going on during the day.

Free time to continue enjoying the magical atmosphere of this city.

We will cross the high atlas, passing the port of Tichka at 2260m high, making several stops to contemplate the landscape and take pictures, since it is one of the most impressive routes in Morocco. We will see the change in the vegetation of Marrakech along with the views of the palm groves and the north face of the mountains. Due to the aridity of the south, we will begin to observe the first Berber villages of adobe on the slopes of the mountains.

We will pass through Telouet, where the ancient Kasbah Glaoui is located, with an Andalusian style and located at an altitude of 1650 meters and we will turn to visit the Kasbah of Ait Ben Haddou, the best preserved ksour (fortified town), declared a World Heritage Site by UNESCO and the scenario of many movies.

After passing the city of Ouarzazate, the so-called “desert gate”, we will continue through the palm grove of Skoura and the Valley of the Roses until we reach the Dades Valley, where we will spend the night surrounded by mountains and valleys.

After breakfast, we will continue along the banks of Boumalne Dades, in a road surrounded by kasbahs and ksours (fortresses or castles), whose landscape is ocher, red and mauve. After a journey full of oasis and palm trees we will arrive at Tineghir, where the spectacular Todra Gorges are perched at 1,350 m altitude and surrounded by a palm grove.

We will continue to Erfoud (city of fossils) and after passing several tracks we will reach Merzouga, in front of the dunes of Erg Chebbi, where we will change from our vehicle to the dromedaries, who will lead us to the camp located near the bottom of the dunes to spend the night in haimas and enjoy the magic of the desert under a blanket of millions of stars.

Typical dinner at the rhythm of Berber drums.

Day 8 - Merzouga - Tour of the dunes in 4x4 - Visit to nomadic Berber families - Fossil and mine area - Khamlia (including demonstration of traditional Gnaoua music) - Afternoon relax to enjoy a ride in the dunes, from the pool of the hotel or to do some optional activity (quads, buggies ...)

Today we will have all morning to explore and discover the way of life and the desert culture. After breakfast departure with the 4 × 4 vehicle to surround the dunes, visit the Berber nomads that live in the area and have a tea with them, approach us to the mines and fossil area to discover the natural resources of the desert and to witness a demonstration of traditional Gnaoua music from the Bambaras group of Khamlia.

Free afternoon to take a relaxing walk in the dunes and enjoy the last sunset in the desert, for optional activities (like quads …) or simply for a relaxing swim in the hotel pool.

Whoever wants it, can get up to watch the last sunrise from the dunes.

We will say goodbye to the desert and resume the route through Valle del Ziz, an extensive palm grove surrounded by gorges.

We will cross the mountains of the Middle Atlas until we reach the cedar and monkey forests of Azrou where you can see macaques living in freedom on the wild.

Then, once past the university city of Ifrane, better known as the “Moroccan Switzerland”, we will arrive at the Imperial City of Fez to enjoy a well-deserved rest in our charming riad.

In the morning, at the time previously agreed, departure for the tour with a local guide from Fez, the oldest of the Imperial Cities of the country that will lead us to the doors of the Royal Palace, a tour in the Jewish quarter, the impressive Medina, with its typical shops and artisan neighborhoods, the neighborhood of the dyers, the exterior of the Mosque, the Koranic School, Al Bouanania, and El Quaraouiyne University.

After breakfast, departure to Meknes, visit at your own to the city, that has is name linked to the name of Moulay Ismail, the great sultan of the Alouita dynasty.. Free visit of the walled Medina of the city, the Bab Mansour gate and the Hedim square.

Then, free visit or optional guided tour to Volubilis, capital of Roman Morocco declared a World Heritage Site by Unesco in 1997.

We will continue to the charming town of Chefchaouen, in the Rif Mountains and famous for its blue streets and facades.

Free time to walk at your own pace through its pleasant medina and to explore its streets and markets.

Depending on the expected departure time of the flight or the ferry from Tangier, free time for the last visits and purchases in Chefchaouen.

Transfer to the port or airport of Tangier.

The visit included in this itinerary with a local guide is in the Imperial city of Fez, a city that we consider essential to know accompanied by a local guide from this city. The rest of the cities included in the program will be carried out freely and at your own pace to give you greater freedom. If you wish to include the visit of other cities with a guide, he must be hired separately as an optional activity.