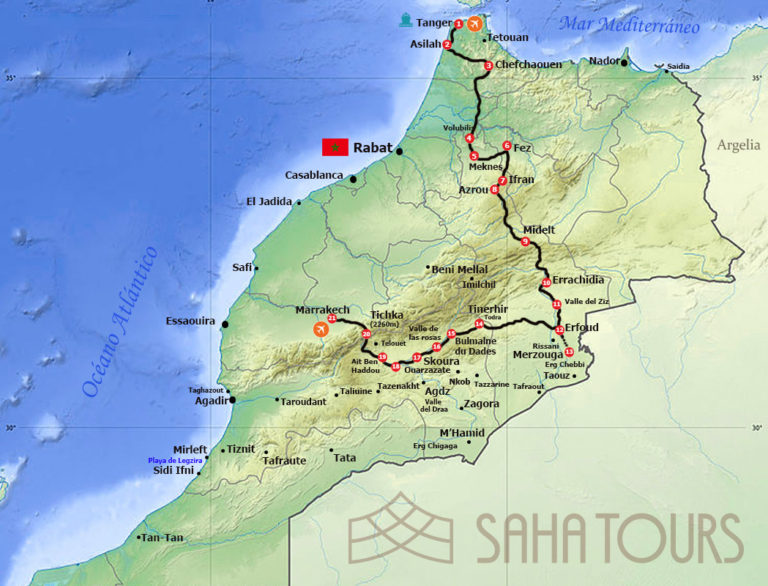 Welcome at the port or airport of Tangier and meeting with the accompanying guide.

Start of the tour with a first stop in Asilah, a beautiful coastal town that has a beautiful medina, endless virgin beaches and welcoming people.

Free time to enjoy the charm of Asilah.

In the morning, departure to the Rif Mountains, where the charming city of Chefchaouen is located, famous for its streets and facades painted in blue.  Free time to discover the charms of this people.

Breakfast and departure to visit Volubilis, capital of Roman Morocco declared a World Heritage Site by Unesco in 1997. Then, free visit at your own pace or with an optional guided tour to Meknes, city that has is name linked to the name of Moulay Ismail, the great sultan of the Alouita dynasty. Visit to the walled Medina of the city, the Bab Mansour gate and the Hedim square.
Arrival in Fez, cultural and religious capital of the country.

Free time for a first contact with the city and its medina.

In the morning, at the time previously agreed, departure for the tour with a Fez local guide, the oldest of the Imperial Cities of the country that will lead us to the doors of the Royal Palace, a tour in the Jewish quarter, the impressive Medina, with its typical shops and artisan neighborhoods, the neighborhood of the dyers, the exterior of the Mosque, the Koranic School, Al Bouanania, and El Quaraouiyne University.

After breakfast, we resume the route to the desert through the university city of Ifrane, better known as the “Moroccan Switzerland”, one of the favorite cities of the king of Morocco, the cedar and monkey forest of Azrou and the Atlas landscapes, until we reach the Ziz Valley, an extensive palm grove. We will arrive in Merzouga near the dunes of Erg Chebbi.

Traditional welcome dinner in the desert.

Day 6 - Full day to discover the way of life and culture in the desert - Tour of the dunes in 4x4 - Visit to nomadic Berber families - Fossil and mine area - Khamlia (including demonstration of traditional Gnaoua music) - Dromedary excursion - Magic night in Berber camp (haimas).

Today we will have all day to explore and discover the way of life and culture in the desert. After breakfast departure with the 4 × 4 vehicle to surround the dunes, visit the Berber nomads that live in the area and have a tea with them, approach us to the mines and fossil area to discover the natural resources of the desert and to witness a demonstration of traditional Gnaoua music from the Bambaras group of Khamlia.

In the afternoon, a dromedary excursion is made to reach the camp located at the bottom of the dunes, while enjoying a sunset that will probably be kept in your memory as one of the best natural shows that you could witness.

Traditional Berber dinner at the camp to the rhythm of drums under the moon and stars, surrounded by dunes and accompanied by a campfire.

We will say goodbye to the dunes and head towards Erfoud from where we will take the route to Tineghir and Todra. We will make a stop to visit its gorges perched at 1,350 m altitude and surrounded by a palm grove, until we reach the city of Boumalne, where the other gorges called Dades were formed. A beautiful tour through valleys, Berber villages, kabashs and a landscape of contrasts between palm trees and vegetation. Today we will spend the night surrounded by mountains and valleys.

After breakfast, we will cross the Valley of the Roses and the palm grove of Skoura until we reach the city of Ouarzazate, located on a large plateau, known as the “Desert Gate” and the Hollywood of Africa.

Optional visits to the Kasbah of Taourirt and to the Universal Film Studios.

Free time for a well-deserved rest or relaxation.

After breakfast, we will go to visit the famous Kasbah of Ait Ben Haddou, declared a World Heritage Site by Unesco and famous for being one of the best ksours – fortified village – and best preserved in Morocco.

Free time to walk through the kasbah and climb to its summit to contemplate the views.

Then we will cross the High Atlas Mountains through the Port of Tichka located 2260m high with its beautiful landscapes.

We will arrive in Marrakech in the afternoon, transfer to your hotel or riad for a well-deserved rest or to start enjoying the magical atmosphere of the city.

In the morning, at the time previously agreed, the local guide will pick you up at your accommodation to start cultural visit of the most emblematic and tourist places of the city.

The visit of the monuments and tourist places is done by foot and accompanied by an official guide of the city.

And finally, the DJEMAA EL FNA PLAZA, which is the central square of Marrakech and the most important place in the medina. Is the center of the public life of Marrakech both during day and night. The best thing about DJemaa el Fna Square is the transformation that is going on during the day.

Depending on the expected flight departure time, free time for the last visits and purchases.

The visit included in this itinerary with a local guide is in the Imperial city of Fez, a city that we consider essential to know accompanied by a local guide from this city, and in Marrakech. The rest of the cities included in the program will be carried out freely and at your own pace to give you greater freedom. If you wish to include the visit of other cities with a guide, he must be hired separately as an optional activity.